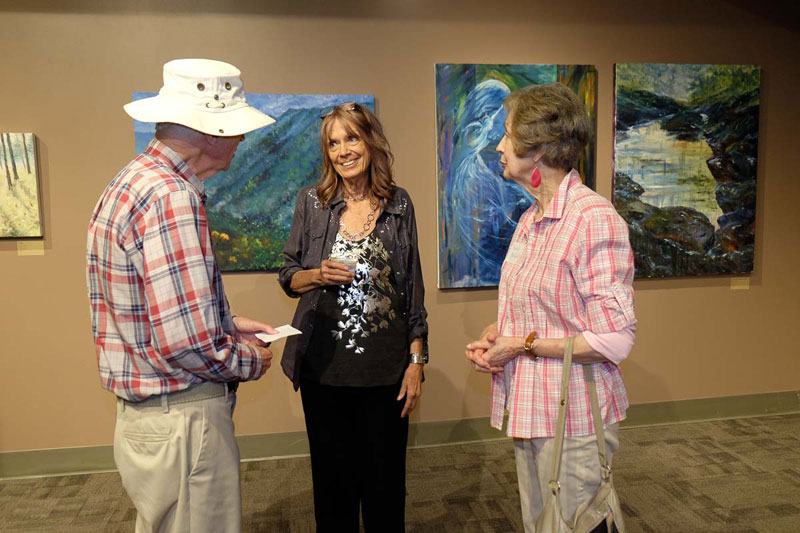 (above) Reception for “Spirit of Place: Artwork by Elizabeth Ellison” – an exhibition of 56 of Elizabeth’s paintings that was on display May 27 – September 4, 2017 in the Baker Exhibit Center at the NC Arboretum in Asheville.

Cover painting and illustrations throughout Literary Excursions in the Southern Highlands: Essays on Natural History, a series of George Ellison’s humorous, scientific and literary essays about one of the most diverse natural areas in North America. (2016, Arcadia Publishing and The History Press)

Cover painting for Our Southern Highlanders, 3rd edition. Author Horace Kephard is well known for this classic collection of essays on mountain life and love. The famed scholar, writer and outdoorsman lived in the Hazal Creek and Bryson City, NC areas from 1904 to 1931 and advocated for the creation of the Great Smoky Mountains National Park. Introduction by George Ellison. Published by Great Smoky Mountains Association. Purchasing information.

Cover painting for James Craig: Patriot Parson, An American Story of Religion and Revolution. Reverend James Craig an Anglican minister preached patriotism and supported the Revolutionary War effort by operating his gristmill as a supply depot for the American army. Dog Ear Publishing, 2013. The author is Cynthia Mattson.

Cover illustration for Letters to the Dead: A Memoir by Jeff Marion. More information

Cover art and illustrations for Permanent Camp: Poems, Narratives and Renderings from the Smokies, a collection of poetry and prose written by George Ellison. Published in 2012, the new book celebrates living in and observing the natural world of the Smokies. Permanent Camp is about George & Elizabeth’s lives raising a family and making a life as a writer and artist inspired by the local landscape. For individual copies contact Elizabeth. Read excerpts.

Contributor to multi-media component of a live concert presentation of The Blue & Green Project – new jazz/blues music inspired by Appalachian Mountain life from saxophonist Jack Wilkins. Mountain Watercolors, a three-movement composition, is based on elements found in Elizabeth’s paintings. The CD is available for purchase from Jack Wilkins. If you have an opportunity to attend a concert, you will see Elizabeth’s paintings on a large screen behind the performers as the music is performed.

Paintings and illustrations for High Vistas, Vol. I: An Anthology of Nature and Descriptive Writing from Western North Carolina and the Great Smoky Mountains. Volume I, 1674 – 1900. Biographical essays introducing the writings of celebrated naturalists like John Muir and William Bartram. Compiled by George Ellison. Purchasing information. Purchasing Information

Cover painting “When Times Were Simpler” for Americana Rural by Nancy Dillingham. Dillingham writes timelessly about rural life in the heartland during the 1930s and 40s. Rob Neufeld of the Asheville Citizen-Times called the book “a series of tableaux …documenting the experience of mountain woman.”

Cover painting “Morning Mist Over Deep Creek” for Smoky Mountain Magic, Horace Kephart’s “lost” novel in print for the first time. Kephart is well known for his non-fictional works, Our Southern Highlanders, Camping and Woodcraft, and The Cherokees of the Smoky Mountains. Published by Great Smoky Mountains Association.

Watercolors and illustrations for the large-format book Blue Ridge Nature Journal: Reflections on the Appalachian Mountains in Essays and Art. Essays on the natural history by George Ellison, illustrated by Elizabeth. The History Press. Purchasing information

Cover artist for Niche Gardens of Chapel Hill, NC, an award-winning nursery specializing in the propagation of native plants.

Cover illustration for Poetry as Prayer.

Illustrator for The Chinese Poet Awakens by Jeff Daniel Marion.

Illustrator for To Find a Birdsong by Billy C. Clark.

Watercolorist for character “Alice” in the movie Songcatcher, filmed fall 1999.

Illustrator for To Catch an Autumn, poems by Billy C. Clark.

Illustrations included in Fodor’s Guide to the National Parks and Seashores of the East (1994).

Visit our studio/gallery on Main Street
in the Old Clampitt Hardware building.

Elizabeth is now representing Ann Smith and Quintin Ellison in her gallery.

Elizabeth offers private lessons in watercolor at the studio. Give her a call for more information.