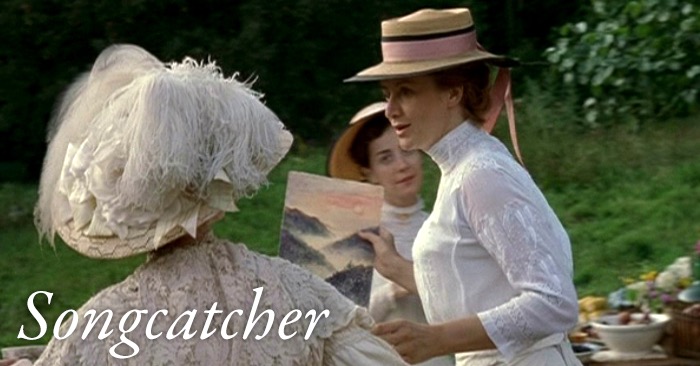 Sketchbook For The Movie “Songcatcher”

Elizabeth was chosen to create illustrations for an actor playing an artist in the movie “Songcatcher,” which was filmed in North Carolina and released in 2000. Elizabeth provided a number of watercolors in various stages of completion for the character Alice, a budding artist.

The journal I kept on handmade paper during my connection with “Songcatcher”. Some of these journal illustrations were used on the walls of Alice’s cabin. 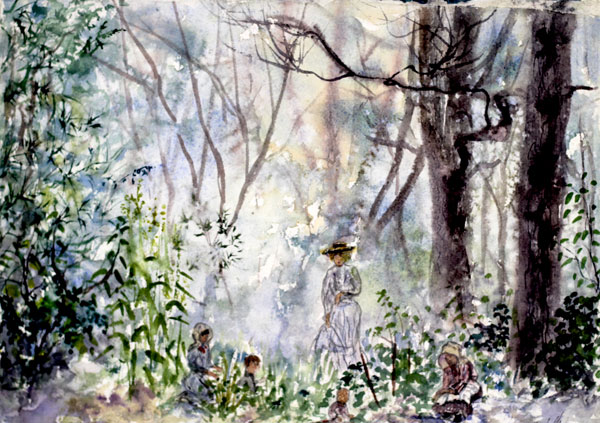 Alice’s painting of Lily and the children in the vegetable garden. She is working on this when Reese appears, disheveled and drunk. 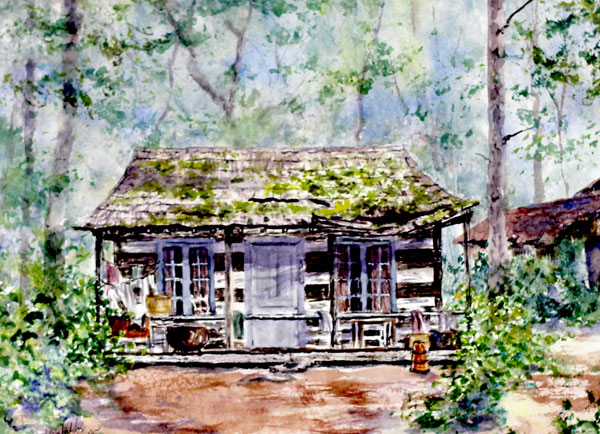 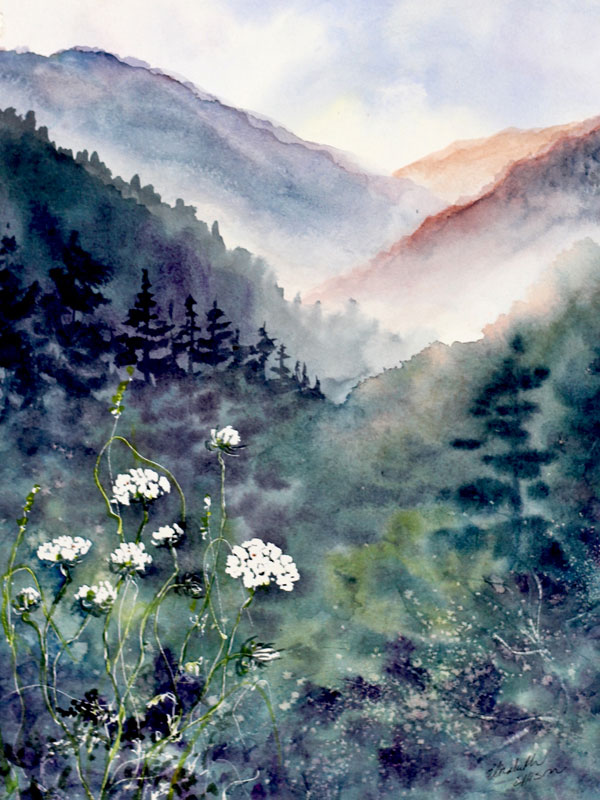 A mountain landscape based on an actual scene near the cabin Aidan Quinn stayed in while the movie was being filmed.

An interview with Elizabeth about her “Songcatcher” experience

How did you become involved in the movie “Songcatcher?

The film crew was looking for an artist in Western North Carolina to do the art work for Alice, the artist in the movie. Lance Holland, who lives in neighboring Graham County and served as the location manager, told them about me and my studio/gallery in Bryson City. Ginger Tougas, the production designer, came by and really liked what she saw, but needed approval of Director Maggie Greenwald and others. I let her take a few small paintings with her to New York to see if this is what Maggie wanted. It evidently was, and we set up a time for Maggie and the director of photography, Enrique Chediak, to visit the gallery.

What did they ask you to do?

Well, the easiest way to answer that is probably just to copy a section of the contract agreement we reached, so here it is:

“Elizabeth will provide for us a number of watercolors in various stages of completion:

What surprised you most?

That the actors and actresses didn’t follow the script exactly. When they came in before the shooting started, they’d be practicing their lines over and over to themselves. But, when they shot a scene – up to seven or eight times – the lines would change. When it was edited they just picked the best ones. When the shooting was over that day, I was walking with Janet McTeer, who told me that in bigger productions, they would shoot a scene more than 50 times!

Did you also meet Aidan Quinn?

No, unfortunately, I didn’t.

Did you visit the set?

I went over there twice. The first time, I went to do a painting of the cabin that was going to be fixed up as Alice’s home. Then, I had to go back for the filming of the work-in-progress segment when Alice “painted” her watercolor. It was exciting – I’d never been around movie actresses and actors before. I was impressed with how hard they worked, and how seriously they took their jobs. Janet McTeer, who played Lily, was having to wear a period long dress with a bustle. It was early September and really hot, and there were yellow jackets all around the cabin where Alice was painting.

Were you involved in the work-in-process film scene?

The “Garden” is the one painting I had to do on location. The movie was low-budget so the director did not want to bring all the actors and crew together to do a rehearsal in full dress. So I had to be there for the actual filming and had to do the painting, which is unfinished as Alice was interrupted by Reese, very quickly. I was told I had about 30 minutes to do what I needed to as everyone was in full dress, and filming needed to proceed as quickly as possible. (I think the actual garden scene was cut when editing took place but Alice painting and the painting I did were not.) So the art director and I decided I should start 3 paintings of the garden and scenery and then when the actors appeared in dress, I could just add them to one of the paintings I had started (the extra two were for backup).

The script called for the camera to pan from the painting to the people in the garden. I finished what I needed to do only using one of my studies. When Chediak put the camera on the painting there was a problem so Maggie Greenwald, the director said “Elizabeth you have to do something, the people are lost in the shooting.” And they expected me to know what to do and to do it immediately as time was money. So after a panic instance, I took the painting into the cabin and used a pencil to outline the figures. I took it back out to Alice and the camera rolled and no one said a thing but nor did I have to figure out something else to do. I breathed a lot easier I can tell you. I saw that when you were hired to do a certain job you were expected to be able to do it—no questions asked and no hesitation.

What happened to the paintings they used?

The one in scene #31 belongs to the movie company. I’m not sure where it is now. I sold another to Wendy Sax, one of the producers, and the remainder I kept.

Would you do it again?

Yes, it was a great experience. I really liked the people I met, and I was truly impressed by their professionalism.

Visit our studio/gallery on Main Street
in the Old Clampitt Hardware building.

Elizabeth is now representing Ann Smith and Quintin Ellison in her gallery.

Elizabeth offers private lessons in watercolor at the studio. Give her a call for more information.